Broadcasting is one of the most effective mediums for conveying a message to a large number of people. It is immediate and trusted. Developing countries and those enduring or recovering from conflict and civil war are often described as ‘Radio cultures’. Radio and television play a major role in informing and shaping public opinion, bringing up to date information to people that cannot be reached by any other means. Broadcasting is accessible to all, without the barriers of cost or literacy of the internet or other media. 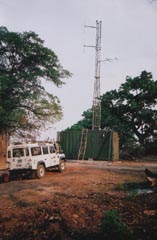 DBS Consulting is a specialised company with expertise in analogue and digital broadcast radio and television, particularly the most important part of any operation, transmission. Our activities however, encompass all areas of radio and television broadcasting including construction of new stations, programme distribution (satellite and terrestrial), upgrading and evaluating existing operations, training and station operation/management. Our experience is biassed particularly towards developing countries and the many countries recovering from conflict. We have worked extensively with both governmental and non-governmental bodies, bringing broadcast radio and television to those in need.We have designed, supplied and installed satellite earth stations for both television and radio distribution. From bandwidth efficient audio only networks to multichannel DVB-S/S2 television systems.

Recent projects have been undertaken throughout Asia, the Middle-East, Africa and Europe. We are not deterred by environments which are politically unstable or potentially dangerous/hostile. We have extensive experience and training in these locations.